Flight to the Ford 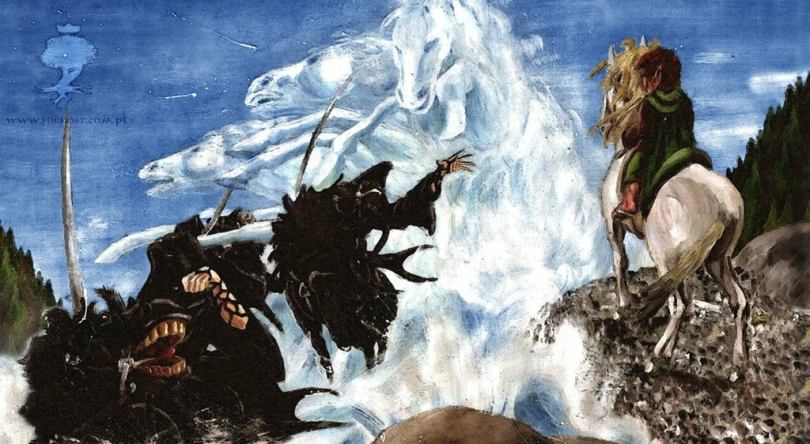 Frodo is wounded.  The Nazgul have withdrawn, but expect him to perish.  Aragorn also fears this.  But he does not suggest that one of the other hobbits try taking the ring, as Sam later will.  And Sam immediately gets deluded by the ring, though he sensibly rejects it.  Merry and Pippin, both heirs to powerful Hobbit lords, would probably be even more vulnerable.

Sam and the others had been confused by the whole attack:

“When Frodo came to himself he was still clutching the Ring desperately.  He was lying by the fire, which was now piled high and burning brightly. His three companions were bending over him.

“’What has happened? Where is the pale king?’ he asked wildly. They were too overjoyed to hear him speak to answer for a while; nor did they understand his question. At length he gathered from Sam that they had seen nothing but the vague shadowy shapes coming towards them. Suddenly to his horror Sam found that his master had vanished; and at that moment a black shadow rushed past him, and he fell. He heard Frodo’s voice, but it seemed to come from a great distance, or from under the earth, crying out strange words. They saw nothing more, until they stumbled over the body of Frodo, lying as if dead, face downwards on the grass with his sword beneath him. Strider ordered them to pick him up and lay him near the fire, and then he disappeared. That was now a good while ago.

“Sam plainly was beginning to have doubts again about Strider; but while they were talking he returned, appearing suddenly out of the shadows. They started, and Sam drew his sword and stood over Frodo; but Strider knelt down swiftly at his side.

“’I am not a Black Rider, Sam,’ he said gently, ‘nor in league with them. I have been trying to discover something of their movements; but I have found nothing. I cannot think why they have gone and do not attack again. But there is no feeling of their presence anywhere at hand.’

“When he heard what Frodo had to tell, he became full of concern, and shook his head and sighed. Then he ordered Pippin and Merry to heat as much water as they could in their small kettles, and to bathe the wound with it.

“’Keep the fire going well, and keep Frodo warm!’ he said. Then he got up and walked away, and called Sam to him. ‘I think I understand things better now,’ he said in a low voice. ‘There seem only to have been five of the enemy. Why they were not all here, I don’t know; but I don’t think they expected to be resisted. They have drawn off for the time being. But not far, I fear. They will come again another night, if we cannot escape. They are only waiting, because they think that their purpose is almost accomplished, and that the Ring cannot fly much further. I fear, Sam, that they believe your master has a deadly wound that will subdue him to their will. We shall see!’ Sam choked with tears. ‘Don’t despair!’ said Strider.

“’You must trust me now. Your Frodo is made of sterner stuff than I had guessed, though Gandalf hinted that it might prove so. He is not slain, and I think he will resist the evil power of the wound longer than his enemies expect. I will do all I can to help and heal him. Guard him well, while I am away!’ He hurried off and disappeared again into the darkness.”

Aragorn returns with the healing herb athelas, which he will later use to heal Faramir and Eowyn.  Oddly, he has not kept a stock with him, and does not bring it with him going south.  Perhaps it does not keep long. Certainly, it does some good, but he is up against strong magic.  He finds the knife that stabbed Frodo, which was accursed.  The blade dissolves, but he keeps the hilt.

Frodo is put on Bill the pony, since he has difficulty walking.  (The unintended good done by Bill Ferny who sold they pony to them.)

They pass through country with ruined evil castles, and the threat of trolls.  Aragorn explains that trolls do not build, but there were evil men dominated by Angmar, the stronghold of the Witch-King who had stabbed Frodo.

He has to use the Last Bridge but fears to find the Nazgul there.  But finds it free, and a green stone set there, a beryl.  This indicates an elven connection, though he is not sure if this was intended.

Later they find the trolls whom Bilbo saw turned to stone.  Pippin sees them first, and supposes they are live even though it is broad daylight.  This false danger cheers everyone, and Sam sings a comic some about a troll.

Glorfindel joins them.  He’s a surprising hero: his horse has small tinkling bells that harmonise with its hoofs.  This may be magic: part of what allows him to ride against the Black Riders.

From Glorfindel they learn that news of them had reached Rivendell in a chain that started with the High Elf Gildor, whom they met in the Shire.  Glorfindel has no news of Gandalf.  He had confronted and driven off three Nazgul at the Last Bridge, and left the green stone that Aragorn found.  He also does what he can to help Frodo, but this is beyond his skill.  (He can read markings on the hilt of the Accursed Knife that Aragorn kept.  He recommends that Elrond will also need to see it.)

Glorfindel sets Frodo on his horse, and advises Frodo to ride ahead if they attack.  He does not want to abandon his friends, but Glorfindel explains that they will be in no danger if he is not with them.  The Nazgul will follow but their horses are less swift.  Five are behind, and probably four ahead.

Glorfindel also lets them drink a cordial which substitutes for food, which has run short.  They journey on, but the other three hobbits are weary now, and Frodo’s sickness gets worse.

But the worst is still to come.  Five Nazgul attack, and Frodo outruns them on Glorfindel’s horse.  His will is being attacked and Glorfindel has to order the horse to run.  Four more Nazgul join in but do not cut him off.  He gets across the river, but is now partly under control and cannot ride further to safety.  He defies them and invokes Elbereth and Luthien.  But he lacks the strength and they begin to cross.  Then the river suddenly rises against them.  And he sees coming behind a white light and some lesser red flames.

The Jackson film replaces Glorfindel with Arwen, and the elf-lord does not explicitly appear.  (He might be an unnamed elf at the Council of Elrond.)  It also has Arwen riding with Frodo and fighting off the Nazgul rather than outriding them, and also raising the river against them.

The Bakshi film also replaces Glorfindel, in that case by a rather silly version of Legolas.

There is some logic to the films doing it so.  Glorfindel appears as if he were to be a major character, but plays little further part.